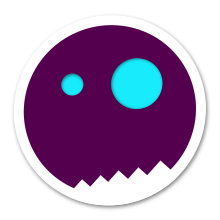 The “Milton Bros” project was my first soiree into the world of character design. I've always had ambitions to develop a game - I think it's the ultimate form of expression - and while I'm somewhat comfortable in learning the development side of things, creating game art was always an extremely foreign world.

I designed Milton (pictured) and “Candle”, among several other bizarre characters, as a way to dive right into experimenting with simple shapes to build memorable characters. Of course, they're silly and rudimentary, but I'm proud of them.

I also wanted to try my hand at using Aseprite, a pixel-art editor. And so came a bunch of little projects.

I realized how restrained the process is. It's tempting to add extremely eye-catching features with every stroke of the pen: scars, tattoos, hats, weapons - anything to catch the eye. The best-designed characters are truly more than the sum of their parts. Garish details, jagged lines, and high-contrast colors just serve to distract and clutter; I noticed that it's the minutiae that really adds life and uniqueness.

I used Sketch and Aseprite for this project.

I definitely plan on creating more “character sets” like this in the future, particularly pixel-art with Aseprite. Hopefully, some 1,000 iterations from now, they'll be good enough to include in a real game.